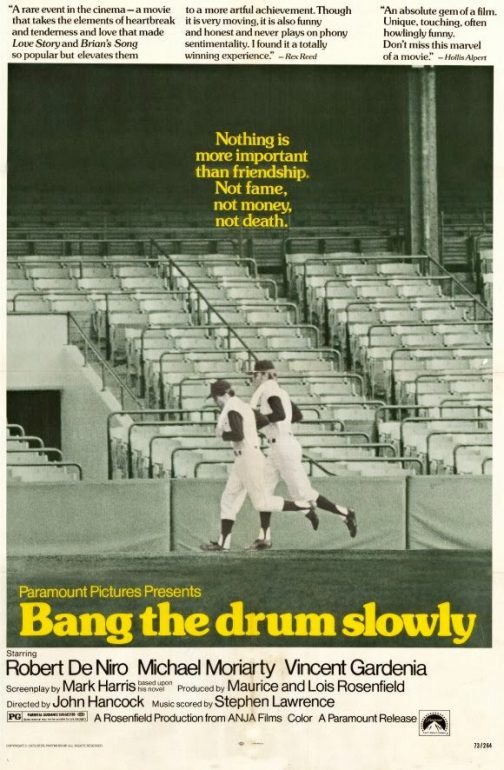 Ellen Adair and Eric Gilde discuss the classic 1973 film, “Bang the Drum Slowly.” They introduce the film (1:19), with an overview of the story, cast, director, and writer. They review the 20-80 baseball scouting grades for rating the film (8:04), with Eric’s best metaphor yet. Then, they begin with Amount of Baseball (10:33), discussing the lack of extended baseball sequences, the desire for a Jomboy breakdown, and a 2020 player comp. Eric surprises Ellen with his scoring. Baseball Accuracy (15:42) considers Bruce’s stupidity as a catcher, Henry’s left-handedness, the excellence of the Athletics and Orioles at the time, the appearance of Brooks Robinson, and filming at Yankee Stadium, Shea, and the Phillies’ Clearwater venue. Some questions are answered, others are pondered: why does Bruce call Henry “Arthur”? What will our scouts call him? Crucially, are the New York Mammoths, the team depicted, in the American or the National League? The confusion of fictional teams playing real teams is discussed, with reference to the “new” Phillie Phanatic. Ellen also brings up Steve Carlton and the 1972 Phillies, plus Don Money. There are other problems: reverse phantom baserunners, visitors to the dugout, the organizational decision-making structure. An Ellen Adair Breakdown on a comparison for Henry’s contract negotiations, pre-Catfish Hunter, concurrent with Curt Flood. A strange Thurman Munson coincidence! Storytelling (40:06) discusses the overture of the beginning, expectations and confusion, Tegwar, and Dutch’s pursuit of the truth to the Minnesota trip. The contract negotiation scene is revisited, leading to a conversation about adapting a novel to a film. Praise for the movie’s deft handling of heavier themes, confusion about the fly speech. Rating the Score (1:05:06) examines Stephen Lawrence’s composition and his “Sesame Street” background, along with the Ken Burns moment, “The Streets of Laredo,” “The Unfortunate Rake” “Spanish Ladies,” “Look Before You Weep,” and Ralph Kiner. Acting (1:13:11) lays praise at the feet of Michael Moriarty and Robert DeNiro, in particular, as well as Vincent Gardenia and Phil Foster. The actor who plays Bradley is not a favorite. Delightfulness of Catcher (1:16:54) revels in an abundance of catchers with a lovable Bruce Pearson at the center, despite a Gary Sanchez burn. The age of Robert DeNiro and Tom Ligon is addressed, along with Piney’s costumes, Goose’s lovely scene with Henry, and Red’s advice. Delightfulness of Announcer (1:23:21) does not offer much. Lack of Misogyny (1:23:45) debates whether or not the film itself has a misogynist viewpoint on Katie, Bruce’s call-girl fiancée, and the female owner of the Mammoths. Props to Tootsie. A high number of female characters for a baseball movie is a positive takeaway. No spoilers on the following segments: Yes or No (1:31:58), Six Degrees of Baseball (1:34:59), Favorite Moment (1:35:52), Least Favorite Moment (1:38:19), Scene We Would Have Liked to See (1:39:55), Dreamiest Player (1:41:25), Favorite Performance (1:42:13), Next Time (1:43:56), and Review Thank You (1:44:54). 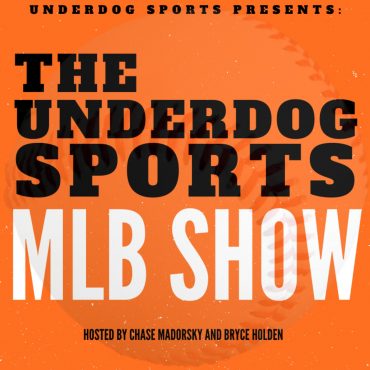 Episode 93: The Times Are Changing in Cleveland

On this week’s episode, we discuss a pending name change for the Cleveland Indians, Sam Fuld being named GM of the Phillies, the Negro Leagues being designated as a “major […]