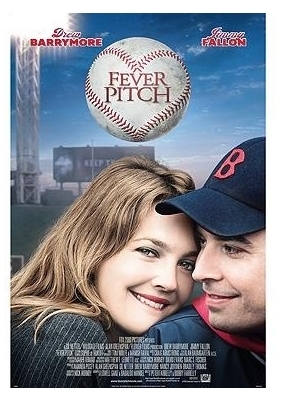 Ellen Adair and Eric Gilde discuss the movie “Fever Pitch,” the 2005 Jimmy Fallon and Drew Barrymore romantic comedy, set against the backdrop of the Red Sox 2004 season. They introduce the film (1:24), with an overview of the story, cast, and director. After a description of the 20-80 baseball scouting grades for rating the film (3:26), they begin with Amount of Baseball (5:10). How do baseball clips, not scenes, rate? What is the minimum requirement for a baseball scene? Plus, date movie deception, and a player comp. Baseball Accuracy (9:50) considers the fictional Red Sox regular season 9th inning rally versus the Yankees, the legitimacy of Lindsey (Barrymore) running across the field in the ALCS, and binoculars that can see into the future or past. Editing around Lindsey getting hit with a foul ball creates some discrepancies for Mike Myers and Miguel Tejada. Our hosts delve into some historical moments: Dwight Evans’s two-homer game in 1980, Pesky’s Pole, Johnny Pesky, Thomas Yawkey, Ted Williams, the Polo Grounds, and Curse of the Bambino examples, ie. Roger Moret, Tony Conigliaro, Ed Armbrister and Carlton Fisk, Bucky Dent, Bill Buckner, Grady Little and Pedro Martinez, and other missing curse elements. They also discuss the possibility of a Cubs-based story, Bart Giamatti, spring at Fenway accuracy, Johnny Damon’s ass, and offseason fandom. Storytelling (34:00) has much love for the dozen Pete Roses e-card, but much confusion about the timeline of the courtship, made problematic by Boston weather accuracy and things Lindsey should really be able to infer about Ben (Fallon) from context clues. Tonal inconsistency dominates. Is Ben sweet or creepy? Is he insecure or confident? Examination of the first date includes the difficulty of genuine vomiting sounds in television and film. Bonus subsections from Ellen: “Extracurricular Activity Accuracy” and “I Empathize.” They discuss Ben’s baseball elegies, luck in baseball, portrayals of fandom as addiction, cell phone gags (with a realization), and Lowell Ganz, Babaloo Mandel and “A League of Their Own.” Rating the Score (1:05:11) examines The Standell’s “Dirty Water,” Neil Diamond’s “Sweet Caroline,” the Dropkick Murphy’s “Tessie,” with deep-dives on the history of these songs by Eric. Nick Drake’s “Northern Sky” and “The Yastrzemski Song.” Acting (1:15:16) sees a debate on Jimmy Fallon’s performance, discussing the pull of sketch, spontaneity, ad-libbing, and Jim Carrey in “The Truman Show.” Drew Barrymore’s believability in this film also discussed. Delightfulness of Catcher (1:22:56) presents a conundrum, but the pair reminisce about meeting Jason Varitek and Ellen reads a short poem. Delightfulness of Announcer (1:25:40) is also a challenge, with such excellent examples present as Joe Castiglione, Peter Gammons, Bob Lobel, Harold Reynolds and Dave O’Brien. Lack of Misogyny (1:27:41) examines the depiction of Lindsey’s friend Robin versus the women in the film on the whole, and the “not like the other girls” conundrum. No spoilers on the following segments: Yes or No (1:33:30), Six Degrees of Baseball (1:38:14), Favorite Moment (1:39:20) Least Favorite Moment (1:41:02), Scene We Would Have Liked to See (1:45:48), Dreamiest Player (1:47:50), Favorite Performance (1:48:34) Next Time (1:49:44) and Review Thank You (1:50:32).

Episode 87: The Return of Alex Cora

On this week’s episode, we discuss Alex Cora’s return as manager of the Red Sox, the BBWA Awards finalists, Justin Turner’s COVID-19 punishment, and the Mets cleaning house in their […]