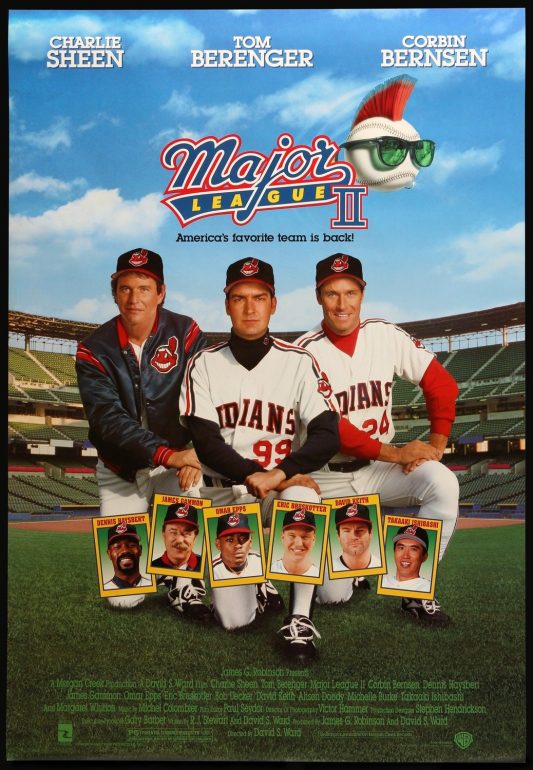 Happy birthday, Take Me In to the Ballgame! For their first anniversary episode, Ellen Adair and Eric Gilde discuss the 1994 movie “Major League II.” They introduce the film (1:13), with an overview of the story, cast, director and writer. They review the 20-80 baseball scouting grades for rating the film (4:58), with a metaphor that leads Ellen to bring up her earliest baseball writing. Then, they begin with Amount of Baseball (11:09), comparing it to “Major League,” and celebrating the healthy amount throughout, and how it is shot. Player comps are still for 2020. Baseball Accuracy (15:18) dives in on Rick Vaughn’s pitching mix (with excellent input from the sensei, Nick Pollack) and the film’s fundamental misunderstanding of both pitching and the role of the relief pitcher. But there are many other questions. Why aren’t people more excited about these pitchers pitching 8.2 innings? Ellen refers to Aaron Nola, Vince Velasquez, and Nick Pivetta. Who is catching when Rube is in the bullpen? HOW many homers is Jack Parkman going to hit? Eric cites Johnny Bench and Javy Lopez. Does Rick Vaughn need glasses? Why are the White Sox villains? Talk about divisions, Skunk in the Outfield Play, and the numbers on Dorn’s purchase of the franchise. Some historical dives on Runners Jumping Over Catchers (Chris Coughlan, Matt Carpenter, Jason Kendall, Deon Sanders, Andrew McCutchen and J.T. Realmuto), Birds Hit by Baseballs (Eric Davis, Dave Winfield, Dion James, Randy Johnson, Shin-Soo Choo and Coco Crisp) and ways in which the film was Ahead of Its Time (offseason skills changes; Asian players, w/r/t Masanori Murakami, Hideo Nomo, Mac Suzuki and Chan-Ho Park; billboards; Hayes’ A-Rod move). Eric discusses Lou Boudreau and Bob Feller, while Ellen looks at players with the yips, particularly Mackey Sasser and Jarrod Saltalamacchia, but also Rick Ankiel, Steve Blass, Chuck Knoblauch and Steve Sax. Storytelling (54:43) addresses the inevitable comparisons to Major League Number One, weighing the excellent jokes to the panoply of offensive stereotypes. Eric has some storyline issues with Rick Vaughn, and Ellen wonders why they had to set the movie the very next season. “Get out of your head” and “have fun” baseball movie tropes surface. They discuss the return to the Rachel Phelps well and unaddressed character changes for Roger Dorn. What happens with Nikki’s White Sox fan boyfriend? – and other issues with the Nikki storyline. Fact checks on her middle school classroom. The Score (1:18:47) is mostly what they want for this. Acting (1:21:03) compliments the returning cast of Charlie Sheen, Tom Berenger, Corbin Bernsen, Dennis Haysbert, James Gammon, and Margaret Whitton. David Keith’s villainy is delicious. Ellen has a take on Omar Epps’ version of Willie, and advocates for Eric Bruskotter. Eric has a Remember Some Guys moment with Randy Quaid. Delightfulness of Catcher (1:35:06) discusses the rich variety of catchers presented in Jake Taylor, Rube Baker, and Jack Parkman, and considers “amount of catchers.” Delightfulness of Announcer (1:41:55) lauds Bob Uecker and Monty’s moment in the spotlight. Some discussion of costume design and announcer questions. Lack of Misogyny (1:45:05) considers, again, Rachel Phelps’ villainy, the role of Vaughn’s agent girlfriend Rebecca Flannery, Nikki, and Dorn’s assistant. No spoilers on the following segments: Yes or No (1:49:14), Six Degrees of Baseball (1:53:16), Favorite Moment (1:54:11) Least Favorite Moment (1:55:56), Scene We Would Have Liked to See (1:58:17), Dreamiest Player (2:00:53), Favorite Performance (2:01:02) Review Thank You (2:05:00) and Next Time (2:06:07).

On this week’s episode of You’re Wrong… and Here’s Why, Chris Horwedel and Greg Crone talk about slow progression in MLB The Show 21′, the diminishing returns of each new […]