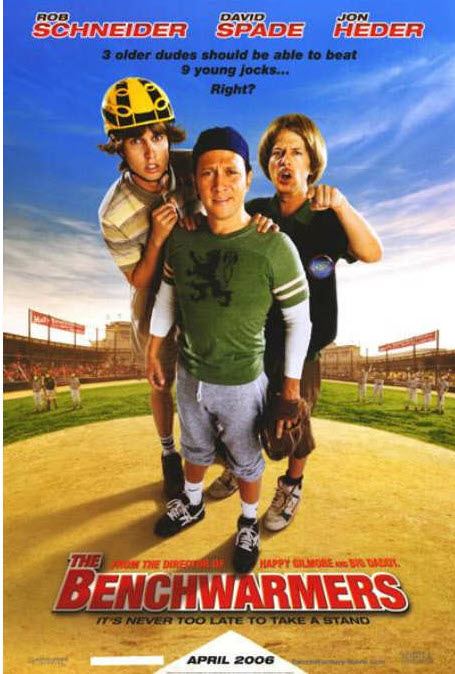 Ellen Adair and Eric Gilde gird themselves to discuss the 2006 Happy Madison production, “The Benchwarmers,” grading it on the 20-80 scouting scale. They introduce the film (1:20), with an overview of the story, cast, director, writers, and the sources of its “humor.” A backstory on why David Spade and Rob Schneider were cast! They review the 20-80 baseball scouting grades for rating the film (8:52), with an on-the-nose metaphor. Amount of Baseball (11:28) sees Eric return to the quality vs. quantity debate, while Ellen tries to be generous while she has the opportunity to do so. Reference to the double-play from the sporting goods store owner’s team and maple syrup on a Ho-Ho. But with Baseball Accuracy (15:42), Ellen reassesses a long-established precedent. They examine the feasibility of a three-person baseball team, particularly given Clark (Jon Heder) and Richie’s (David Spade) unbelievable lack of motor skills. The one-person team idea rears its head again with Gus (Rob Schneider), with references to Shohei Ohtani, as always, and Jackie Bradley Jr. Batting order ramifications are also touched on: how could they be up 17-0? An Ellen Adair breakdown on more scoring problems in a different game, and a dive in to history with the story of Danny Almonte. They also discuss Reggie Jackson and Jon Moscot’s appearances, the classic MLB parks folded into the new stadium, however improbable its construction timeline, the tournament structure, and physics accuracy problems. Lastly: are the Benchwarmers even appropriately named? Storytelling (42:26) goes back through the dusty files to compare to scoring on “Ed.” Age and time also do not exist in this film. The movie’s mean-spiritedness is discussed, with its bevy of homophobic and fatphobic jokes, its attitude towards the character of Marcus, whom Gus used to bully, and little people in general. The training montage with Reggie Jackson irks one scout. Confusion about Mel’s (Jon Lovitz) profession leads to a discussion about adult nerds, a Diet Coke ad, a sick burn about using the internet, and the Star Wars product placement. Nick Swardson’s character: why? Also there is a robot butler. They bring up “The Bad News Bears,” Jack Todd’s Dave Dombrowski anecdote, Gus’s weird Mountain Time lie, and violence against opposing children. Rating the Score (1:11:24) brings up “Take Me Out to the Ballgame,” “Jerk It Out,” a Gandalf meme, and need for therapy. Acting (1:13:11) is a philosophical inquiry: could anyone do better? Eric gives his spontaneous hypothetical. Jon Lovitz is always excellent. Ellen shares her affection for David Spade, but misgivings about the casting. Delightfulness of Catcher (1:19:28) considers Spade as a catcher character, specifically, and the opposing catchers. Delightfulness of Announcer (1:20:45) considers the two podcasting children and why the girl is given almost no lines. But also: Lack of Misogyny (1:21:48) considers the lack of intelligence required of the female characters in order to be love interests to their unpleasant male counterparts, and the universe in which mean and/or stupid derps get smoking hot chicks 3/3 times. Gus’s baffling avoidance of sex with his model-gorgeous wife is also discussed, plus: ovulation accuracy. No spoilers on the following segments: Yes or No (1:28:12), Six Degrees of Baseball (1:31:29), Favorite Moment (1:33:45) Least Favorite Moment (1:36:32), Scene We Would Have Liked to See (1:37:48), Dreamiest Player (1:39:39), Favorite Performance (1:40:12) Next Time (1:42:58) and Review Thank You (1:44:29).