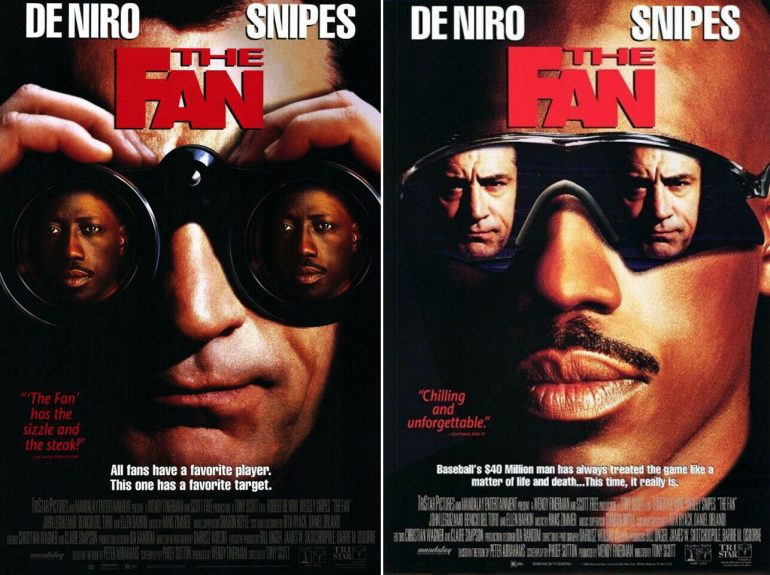 Ellen Adair and Eric Gilde discuss the 1996 thriller “The Fan,” rating the film on the 20-80 scouting scale. They introduce the film (2:20), with an overview of the story, cast, and director Tony Scott’s style. After a description of the 20-80 scouting grades for those who are unfamiliar (6:33), they begin with Amount of Baseball (7:57), pondering whether the finale counts as a baseball scene. They also consider how the average shot length impacts the amount of baseball received and include a 2020 player comp. Baseball Accuracy (11:28) opens with a consideration of how Barry Bonds being mentioned in this film tears at reality’s very fabric. The two talk Carl Hubbell, Willie Mays, Willie McCovey, question Primo’s actual position, and wonder how Bobby Rayburn (Wesley Snipes) can return to a game after leaving it. The character that John Kruk plays has a truly superhuman hitting feat, and heads explode as they ponder a game in which it appears the Giants play multiple teams. The category wraps up with a brief history of baseball players murdered in the midst of their careers. Storytelling (39:42) examines Roy and Gil’s relative likeability, issues with Gil’s career as a knife salesman, and the strangeness of the bathroom and sauna scenes. Meanwhile, what is up with their drink orders?! Plus, an idea for a drinking game if you would like to get trashed while watching this movie. There are 10,000 questions raised by the wild and confusing finale. Score (1:18:48) feels some Gladiator vibes with this Hans Zimmer composition, and raises the question of how to consider a score that’s better than its movie when separated from it. Some consideration of the Rolling Stones subplot. Acting (1:23:45) praises not just Robert DeNiro and Wesley Snipes, but Benicio del Toro, John Leguizamo, Ellen Barkin, Kurt Fuller, Patti D’Arbanville, Chris Mulkey, and the young actors Andrew J. Ferchland and Brandon Hammond. Also, props to Snipes’ stunt double. The Delightfulness of Catcher (1:28:37) reveals truths about Gil’s friend Coop before a quick look at the Delightfulness of Announcer (1:30:39). Lack of Misogyny (1:31:47) considers Ellen Barkin’s character, as well as her excellent bar scene with Wesley Snipes. No spoilers on the following segments: Yes or No (1:36:36), Six Degrees of Baseball (1:43:38), Favorite Moment (1:46:23) Least Favorite Moment (1:47:58), Scene We Would Have Liked to See (1:49:49), Dreamiest Player (1:55:40), Favorite Performance (1:56:27), Next Time (1:58:38), and Review Thank You (1:57:55).