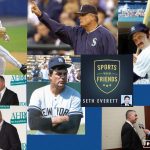 Longtime player and manager Lou Piniella has a long history with Seth Everett. Piniella and John Franco were both honored at the 40th Annual Thurman Munson Awards Dinner at Pier Sixty at Chelsea Piers in New York City on February 4, 2020. They both were guests on this episode.

Piniella’s managerial tenure covered the Yankees, Reds, Mariners Devil Rays, and Cubs. It was when he managed the Mariners, that Seth covered them for KJR from 1998-2001. This episode is a reunion for a mentor in Seth’s career.

During an 18-year Major League career which included a Rookie of the Year campaign for the Royals in 1969, an All-Star season, and 1,700 career hits, Piniella was a two-time World Series champion teammate of Munson in back to back seasons in 1977 and ’78. “Sweet Lou” continued that success as a manager with 1,835 managerial wins. He was selected Manager of the Year three times, and honors, and a World Series ring in Cincinnati in 1990.

John Franco is one of baseball’s all-time great relief pitchers during a 22-year career including 15 seasons with the Mets including three years as team captain. His 1,119 career games is a National League record, and ranks fourth in the history of Major League baseball. Franco’s 424 career saves rank fifth all-time (second upon his retirement), and remains the most by a left-hander. The St. John’s product was a four-time All-Star, three-time NL saves leader, and two-time Rolaids Relief Man of the Year Award recipient. Franco is enshrined in the Mets Hall of Fame, the Staten Island Hall of Fame and the National Italian American Sports Hall of Fame.

Piniella received the Thurman “Champion” Award, and Franco was presented with the Munson “Captain” Award.

Court Storms, Crazy Atmospheres, and a Month from the Madness

On this week’s episode, Kevin and Brad tackle everything from mid-major bubble hopes to whether the top 7 has separated itself from the pack.