How To Play Baseball 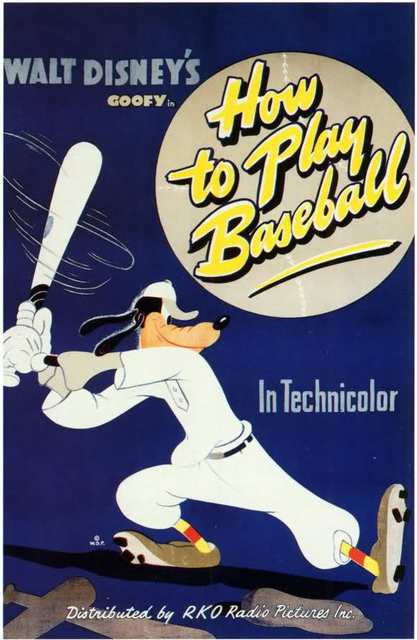 Ellen Adair and Eric Gilde discuss the 1942 Disney short, “How To Play Baseball,” starring many, many Goofys. They introduce the cartoon (1:55), with Ellen clarifying precedent established concerning cartoon short eligibility as a baseball film (per a previous ruling discussed between Alan Sepinwall, Joe Posnanski, and Mike Schur). This is of course followed by a review of the 20-80 baseball scouting grades for rating it (7:59). Amount of Baseball (14:30) gets help from its status as ratio-based. Baseball Accuracy (16:50) considers the cartoon’s example and argument of the game’s simplicity, the ball and glove (A.G. Spalding, Rawlings, Charlie Waitt, Doug Allison, Bill Doak), descriptions of pitch types, the World Series player shares, and hitting the cover off the ball (Martin Maldonado, Tony Walters, Jose Reyes, Bryce Harper, Jose Abreu). Ellen and Eric then turn to Storytelling (47:55), where they consider the cartoon’s structure of a descriptive half followed by a narrative half. Goofy and goofiness are praised, generally, and questions arise about fights with the umpire, which team the viewer really should be rooting for, and the notion of sentient baseballs. Swing music and high stakes come into play when discussing the Score (56:46), and Acting (58:31) discusses the skill and limits of Fred Shields’ narration. Delightfulness of Catcher (59:56) and Delightfulness of Announcer (1:02:25) and Lack of Misogyny (1:04:21) discussions are limited due to the nature and contents of this short cartoon. No spoilers on the following segments: Yes or No (1:06:12), Six Degrees of Baseball (1:12:07), Favorite Moment (1:15:16) Least Favorite Moment (1:16:49), Scene We Would Have Liked to See (1:19:46), Dreamiest Player (1:21:37), Favorite Performance (1:23:20) Review Thank You (1:25:30) and Next Time (1:27:25).

Elephant In The Room