It’s Good To Be Alive 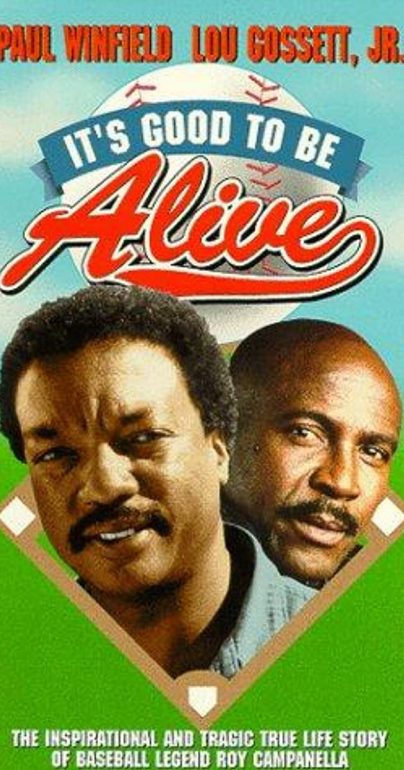 Ellen Adair and Eric Gilde discuss the 1974 Roy Campanella biopic, “It’s Good to Be Alive,” rating this TV movie on the 20-80 scouting scale. They introduce the episode (1:19), with an overview of the story, cast, and expectations coming into the film. After a description of the 20-80 scouting grades for those who are unfamiliar (8:37), they begin with Amount of Baseball (10:12), discussing how to bring something up to code to be considered a baseball movie. Eric makes some claims about the scouting scale. No spoilers on the player comp! Baseball Accuracy (14:51) includes an Ellen Adair Breakdown on Campanella’s hands and injury history, along with details of the car accident and initial expectations afterwards, Campy’s thoughts about L.A., Ruthe’s visits, Campy’s salary and Walter O’Malley, and a compare and contrast of his real speech vs. the film speech. Storytelling (36:22) examines the usage of flashbacks, both good (a childhood scene about his biracial identity) and bad (a very puzzling scene with his son David). Discussion of the difficulties of Roy adjusting to his new life, Campy as a coach and manager, and the annoying reporter, with shout-out to Jason Vargas. Praise for the fly scene, and speculation about what Ruthe is drinking. They discuss the Score (1:03:17) and Acting (1:04:50), particularly Paul Winfield, Ruby Dee, and Louis Gossett, Jr. Ellen has a rundown of three specific excellent choices by Ruby Dee. Delightfulness of Catcher (1:10:45) is a fun tool to score for this film, with conversation about real Roy vs. his film depiction, some highlights of his real-life catching career, and mentioning early interest in him from the Phillies and Pirates. Ellen is not able to resist mentioning J.T. Realmuto, but just once. Delightfulness of Announcer (1:17:30) and Lack of Misogyny (1:18:11) follow, the latter considering that the film was written from Roy’s point of view. Eric brings up some of the questions about the timeline on the night of Campanella’s accident. Yes or No (1:25:16) briefly addresses Jackie Robinson and Satchel Paige easter eggs in the film, along with the Classic Questions. No spoilers on the following segments: Six Degrees of Baseball (1:29:42), Favorite Moment (1:31:34) Least Favorite Moment (1:33:28), Scene We Would Have Liked to See (1:34:25), Dreamiest Player (1:38:14), Favorite Performance (1:39:23), Next Time (1:42:33), and Review Thank You (1:44:14).

Episode 195: One Week in the Books

On this week’s episode of The Underdog, Chris Horwedel and Anshu Khanna talk NFL news including Tom Brady’s debut, Allen Robinson wants out and Zach Ertz not being happy, as […]