172. The Ladies of Smallville from Wizard World New Orleans 2020 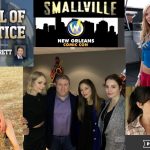 Three stars of the iconic TV series “Smallville” were live on stage on January 22, 2020, during Wizard World New Orleans Comic-Con.  Kristin Kreuk, who played Lana Lang, Erica Durance, who played Lois Lane, and Laura Vandervoort, who played Kara aka “Supergirl,” all took the stage in a panel that focused on the women on the show.

The panel was open, honest, and inciteful.   They discussed their character’s development over the years, and the impact the show had during its run and after it was over.

Thanks to Wizard World for use of the audio.

On a brand new episode of the Underdog Sports NBA show, Tyler and Zandrick talk All-Star weekend, the buyout market, the Cavs and John Beilein and the 76ers!